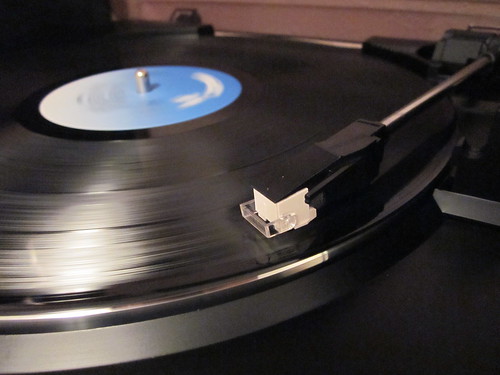 It might be an understatement to say I’m an avid music collector. I mostly collect records and CDs, but I do have a fair amount in MP3 format as well. Any physical media I have is catalogued in my Music Database. It’s always a work in progress, as I’m adding new music all the time.

Q: Where do you buy your music?

A: Most of my collection is from used record shops or music sales. I’ll buy brand new records and CDs every so often, but so few brick-and-mortar shops sell new albums these days.

Q: How do you store everything?

A: I have a really huge CD shelf that takes up an entire wall that holds something like 1,500 CDs. I’ve outgrown that, so I have the remainder in IKEA storage boxes. My records are in an IKEA bookcase (Kallax, formerly Expedit). I’m pretty close to outgrowing that, too, so I’ll need to come up with another plan. All of my CDs are in their original cases with their original artwork. My records (and 45 RPM singles) are all in protective poly sleeves.

Q: Why do you catalogue your music?

A: I decided it was necessary when I kept buying duplicate albums. For artists that have an extensive back catalogue, it’s so hard to keep track of which albums I own – especially since I have some albums on vinyl and others on CD. I can access my database on my phone, so if I’m out shopping I can double-check to make sure I’m not buying something I already own. The database has come in handy in many ways, though, so I’m glad I have it.

Q: Why do you still collect physical media when most people just listen to music digitally?

A: I have nothing against digital music. It’s definitely handy to have several hundred albums on a little device (I love my iPod Classic) or on the computer. I also love streaming music services and am an avid Spotify user. But, I really do prefer having the actual album in my hands. Maybe it’s the graphic designer in me, but I love looking through the album artwork. Having actual physical media just feels more “real” to me than MP3s.

Q: When did you start collecting music?

A: I grew up surrounded by music. My mum, sister, and brother all had stacks and stacks of cassettes and records, so I was immersed in music from an early age. I didn’t actually start buying my own music until the late 80s. I’m pretty sure my first cassette was a New Kids On The Block album, but I honestly can’t remember. I really got into collecting music in the early 90s, and toward the end of the 90s I worked at a couple of record shops and that gave me an opportunity to really fill out my collection.