This is Jack. I’m pretty sure he’s partly Maine Coon, which explains his extreme fluffiness and also his size. He’s a big cat, but not as big as a lot of Maine Coons get (he’s only about 12 pounds, as opposed to the typical 18 pounds many Maine Coons weigh). I adopted him from the Animal Relief Fund on October 18, 2008. He was about two years old when I adopted him, and he was abandoned because his owner passed away. He’s a generally well-behaved cat, and he’s pretty cuddly. He also knows his name. He’s kind of like a puppy in the sense that he follows me around everywhere and has learned a few “tricks” — he can catch treats in his mouth, and he sits when I tell him to. Jack is my little buddy. 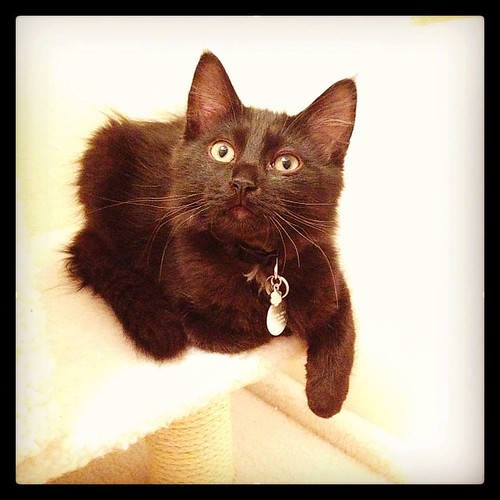 Simon was adopted on August 4, 2014 from the Animal Humane Society. He was about 13 weeks old when I adopted him. He’s really shy, but he’s slowly getting used to my friends and family when they come to visit. He and Jack are inseparable. Simon is just an incredibly sweet cat who loves to play, bound around the house like a madman, and eat English muffins or bagels when nobody’s looking. He also doesn’t quite know how to meow, so he kind of chirps and squeaks. He’s learned his name, and if I say, “Is there a Simon out there?” when he’s in another room, he comes to me.

This is Alfred. He’s a normal corn snake.I adopted him from Petco on March 28, 2012. A family had dropped him off because they found him in their apartment building. The theory is that he was someone’s pet, and he got away when the owner was moving out of the building. The family that found him couldn’t take care of him, so they dropped him off at Petco in hopes that they would help him find a forever home. He’s very social and loves to be held. He absolutely loves people-watching and watching TV. His enclosure is in the living room, and he will watch whomever is within his view. If I hold him while watching TV, he will sit and watch for as long as I’ve got him out. He came with the name Alfred, which I love because I can say he was named after Alfred Pennyworth, the butler for Bruce Wayne (Batman).

This is Jarvis. He’s a sunglow corn snake. I adopted him from Leaping Lizards Reptile Shop on April 15, 2012. He’s a very sweet snake, and spends a lot of time out and about in his tank. He loves climbing. He’s named after Edwin Jarvis, the Avengers’ butler — you know, just sticking with the whole snakes-named-after-fictional-butlers theme. He’s more shy than Alfred when it comes to being held, but he’s still very sweet.