Tired Of Being Tired

For over ten years I’ve dealt with fatigue, excessive daytime sleepiness, and just generally feeling tired all the time. It’s definitely gotten worse over the years. It’s really difficult to describe what it feels like, because just saying “I feel tired” doesn’t really capture it. I always feel like my brain is foggy – not completely “dazed” but just sort of like I’m going through life without being 100% “there.” I feel like how a normal person would feel if they were functioning on three hours of sleep…but I feel like that every day no matter how much sleep I get. Whether I sleep an hour or 16 hours I feel exactly the same. I feel like I’m an addict to sleep…I’m constantly thinking about when I can take my next nap. It’s been affecting my social life and other areas of my life.

I’ve brought it up pretty much every year I get a physical, and the doctors respond the same way – they take blood samples and test me for every possible thing they can. Everything comes back normal. I guess the good news is that I’m not diabetic, I don’t have mononucleosis, I’m not anemic, my thyroid is normal, I don’t have untreated depression, and my vitamin D deficiency isn’t affecting my energy level (this was discovered when I took 50,000 IUs of vitamin D a day per the doctor’s suggestion – even with that dose I still felt the same level of tiredness).

I tried changing my diet, I tried exercise, I tried yoga, I tried going to bed at the same time every day and waking up at the same time, I tried cutting out caffeine any time after noon, I tried just about everything and nothing seemed to work. I wondered if it had something to do with how I was sleeping, so I started with some things at home. I locked the cats out of my bedroom when I slept, I slept with ear plugs, I got a better pillow, I made sure the room was always at a comfortable temperature…but nothing affected how I felt when I woke up. I thought perhaps it had something to do with a sleeping disorder.

I visited with a sleep specialist on April 9, 2013 to talk about my excessive daytime sleepiness. We chatted for quite a while, and she decided to have me do a sleep study as well as wear an Actiwatch (an actrigraphy device) for two weeks leading up to the study. 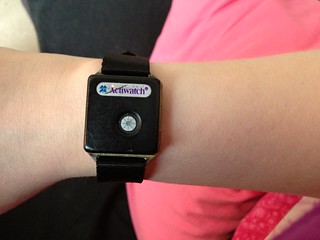 I wore the Actiwatch 24/7 for two weeks. Any time I went to sleep, I pressed the button on the watch. When I woke up, I pressed it again. It read my activity level for each day, but the doctors really only looked at the activity during my periods of sleep.

The sleep study was done on May 31, 2013. I slept in a room that was like a little hotel room. It was pretty nice. It took about an hour to get me hooked up to 25 electrodes, a strap around my chest and a strap around my waist, an oxygen monitor, and an oxygen sensor in my nostrils. 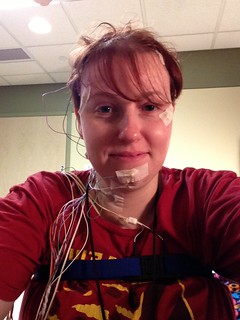 I felt a little bionic, and a lot uncomfortable and awkward. 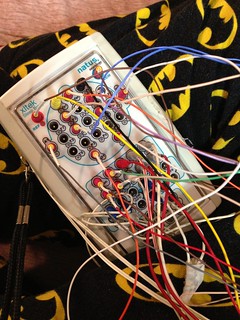 And then I got to wear this around my neck, like some sort of scientific Flava Flav.

I didn’t sleep very well, for obvious reasons. It was weird being hooked up to all the wires. Plus, I wasn’t in my own bed, I didn’t have my normal “winding down” routine, I had things poking into my head and face, I couldn’t move much because I was afraid I’d unplug something, and I was a little freaked out that the entire time I was being filmed and watched through a video camera. I know these were all things that were necessary in helping me figure out what was wrong, but it still made for an uncomfortable night’s sleep.

I woke up around 6:30 AM and they unhooked me from all of the electrodes. Then I took an amazingly long shower because I was covered in goop and tape. That may have been the best shower of my life.

It’s so frustrating to have something wrong with me that I have no idea how to fix. It’s weird, because if I wasn’t able to sleep, there would be lots of solutions. But, if I sleep too much and never feel rested, it seems to baffle every doctor I talk to. I’ve tried researching it on the internet, but the only conditions that seem to have this excessive tiredness are all conditions I’ve been tested for and don’t have. It’s so incredibly frustrating, and I’m at a loss.